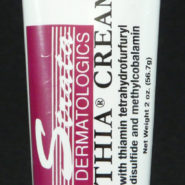 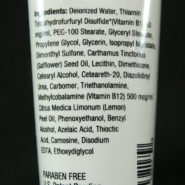 Authia supplies 50mg/ml of TTFD a lipid soluble sulfur derivatized form of vitamin B-1 in each ml of cream as well as 500mcg/ml of vitamin B12.

Indications; Authia may be a useful dietary adjunct for individuals who wish to supplement their diet with this essential B vitamin derivative.

Suggested Use: Adults and Children take 1/4 teaspoon (apx. 1ml) topically daily or as directed by physician.

Side Effects: Occasional localized rash at the site of application has been reported. No contraindications are known other than a rare sensitivity to excipients in the cream (Paraben Free)(See PDR Reference). Adverse reactions may include a “skunk-like odor” due to abnormal metabolism of the patient, which can gradually dissapear as clinical improvemnt occurs and can often be modified by taking 10mg of Biotin daily. (See Physcian’s Desk Reference)

How Supplied: Thiamine (vitamine B1) disulfide and methyl vitamin B12 is is supplied in a 2 0z. plastic tube hat does not require refrigeration and appears as a pink liposomal cream for topical application designed for transdermal delivery (TD) of the two vitamins. It has a mild thiol odor due to its sulfur content.

As co-enzymes, the B vitamins are essential components in most major metabolic reactions. They play an important role in energy production, including the metabolism of lipids, carbohydrates, and proteins. B vitamins are also important for blood cells, hormones, and nervous system function. As water-soluble substances, B vitamins are not generally stored in the body in any appreciable amounts (with the exception of vitamin B-12). Therefore, the body needs an adequate supply of B vitamins on a daily basis.

Thiamine (Vitamin B-1) is an essential coenzyme in energy production. Thiamine is converted quickly into thiamine pyrophosphate, which is required for glycolytic and Krebs cycle reactions. Thiamine also appears to be related to nerve impulse transmission.

Since thiamine is critical for transketolase function, thiamine deficiency diminishes thiamine dependent enzymes, disrupts mitochondrial function and leads to diminished energy metabolism and the production of NADPH. Gibson and Zhang (Gibson and Zhang 2002) found that interactions involving oxidative stress, together with abnormal thiamine homeostasis, promoted neurodegeneration in a number of chronic neurological diseases.

Both TTFD and vitamin B1 activate the transketolase enzyme and thiamine is important in glucose metabolism as it drives the flux of metabolites through the hexose mono-phosphate shunt. Further, Authia can be used in cases of sulfur depletion, TTFD is expected to act as a sulfate donor during its metabolism. It is suggested that TTFD acts as a metal-chelating agent as well.

Nerve cells are particularly sensitive to thiamine deficiency and our data on transketolase in ASD may be important to understanding the disease in light of B1 deficiency or insufficiency, which could affect neuronal function and potentially brain development or contribute to the development of the ASD phenotype. Loss of these brain cells has been noted during ischemia, hypoxia, excitotoxicity, G-protein dysfunction, viral infection, heavy metal toxicity and deficiency of both thiamine and magnesium (Kern 2002). In that regard, the significance of dysautonomia in ASD can be illustrated by Beriberi, the nutritional disease from thiamine deficiency, which is considered the prototypic model for early stages of dysautonomia (Inoouye 1965). However, this must be distinguished from frank thiamine deficiency (Platt 1967). Kern and Jones (Kern and Jones 2006) noted that loss of Purkinje cells in the cerebellum is a consistent finding in autopsy studies of autistic patients. This is also a consistent finding in Wernicke Korsakoff syndrome (Butterworth 1993), a pathological finding also reported to occur in children (Vasconcelos, Silva et al. 1999). Simon discussed evidence that brain damage in infantile autism may involve the same complex of brainstem nuclei that are damaged by alcohol abuse, thiamine deficiency, and asphyxia (Simon 1990). The most metabolically active structures in the brain make them vulnerable to many injurious factors. The high metabolic rate in brainstem nuclei supports a control function for multiplexing of neural pathways. If this control is lost it may result in the defects of awareness and responsiveness seen in autistic children (Simon 1990). Authia Cream is an easy form for these childen to supplement vitamin B1.

Disclaimer: These statements have not been evaluated by the Food and Drug Administration.

This product is not intended to diagnose, treat, cure, or prevent any disease.